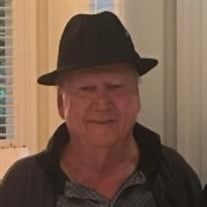 Wallace E. Westbrook, of Shenandoah, Texas, completed his journey on this earth on October 31, 2020. He was born on December 27, 1947 in Jasper, Texas, to Elmer Leo Westbrook and Sarah (Sholars) Westbrook. His childhood included years in southeast Texas and also a couple of years in Okinawa, Japan, where his father was stationed in the Air Force. In 1958 the Westbrooks settled in El Paso, Texas, which became home and where he would make friends that would last for a lifetime. Wally graduated from Coronado High School in 1966. Wally entered the workforce to work at a local bank, following in the footsteps of his father, but then soon joined his brother off the coast of Louisiana to work in the oil and gas pipeline industry. After a few years he moved to Lubbock, Texas, where he enrolled in the Sunset International Bible Institute from 1971-1972. Although his career path would not result in formal ministry, Wally’s education at Sunset made a long-lasting impact on his Bible knowledge, his faith, and his major life decisions. In the mid-1970s Wally opened the Roaring 50s, an ice-cream parlor modeled after 1950s décor and expanded his restaurant business. He also became an insurance salesman, and he maintained this license for several years even after his family moved to Houston in the late 1970s. Wally was a visionary who had the perfect blend of artistic creativity and persuasion, a combination of talents that prepared him for building quality homes. In 1980, Wally launched Westbrook Building Company, Inc., and from 1980-1996, his commitment to excellence in workmanship and attention to detail would leave his footprint on the building industry throughout Texas—Spring, The Woodlands, Dallas, and Austin. His homes were known for their elegance, large square footage, and innovative design. During his years as a builder, his homes were featured in magazines and other print literature. Leo Westbrook, Wally’s brother, also moved to the Houston area to build houses through his own company, Unique Custom Homes, Inc. Under Wally’s leadership, Westbrook Building Company contributed a great deal to the direction of large, stylish homes in The Woodlands. After suffering from a major stroke in 1996, his health issues forced him to step away from building, but he never abandoned his work ethic and creativity. After he recovered from his stroke, in 1998, he formed Westbrook Designs and continued to design homes for the next 22 years. In 2012, Wally suffered another medical emergency that left him with kidney failure and a complex health situation. In 2016, Laurie Hartley graciously became his living kidney donor and extended his life and quality of life for 4 more years. Throughout his life, Wally Westbrook maintained a commitment to his faith, his family, and his work. As family gathered around him in his final days, he told each one that he loved him or her. His eyes would light up each time he would see one of his grandchildren. He would say with tears in his eyes that he has a wonderful family. As his physical body expired, there is no doubt that he was received on the other side with the words “Welcome to your reward, my good and faithful servant.” Wally Westbrook was welcomed in heaven by his parents Elmer Leo Westbrook and Sarah (Sholars) Westbrook and by his granddaughter Zerona Hartzog. He leaves behind his wife Ella Westbrook (married on February 22, 2002); his children Drs. Tim and Anessa Westbrook, Sarah Westbrook, Chris and Stephanie Snowden, and Donnie and Jennifer Pogue; his grandkids Alina Westbrook, Anna Westbrook, Theo Westbrook, Bowen Westbrook-Hartzog, Sawyer Westbrook-Hartzog, Collin Snowden, Shilo Snowden, Drake Pogue, and Madelynn Pogue; his brother E. Leo Westbrook, Jr.; and his kidney donor Laurie Hartley. ALL FLOWERS SHOULD BE DELIVERED TO THE CHURCH SATURDAY MORNING. The Committal Service in Woodville, Texas is private. The stream of the service can be seen at the following address: https://youtu.be/bwavm8U_Mds

Wallace E. Westbrook, of Shenandoah, Texas, completed his journey on this earth on October 31, 2020. He was born on December 27, 1947 in Jasper, Texas, to Elmer Leo Westbrook and Sarah (Sholars) Westbrook. His childhood included years in southeast... View Obituary & Service Information

The family of Wallace "Wally" Westbrook created this Life Tributes page to make it easy to share your memories.

Send flowers to the Westbrook family.