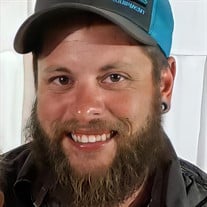 Troy Ryan Ellisor, age 33 ascended into heaven on November 3, 2021. He was born on Friday, December 18, 1987, at Cypress Fairbanks Medical Center in Houston, Texas on a cool winter day to Mark Lee and Kimberly Diane (Montgomery) Ellisor. He met Ashley Marie Shirley while they were attending Bear Branch Junior High together. They became enamored with each other and began dating in 2000. Together they had three children: Chance Ryan, Jaiden Michael, and Herlie Ann Marie. Troy had an adventurous childhood, including spending time skateboarding, fishing, camping, roller-skating, playing kickball, and engaging in shenanigans with his family and friends. He had an incredible passion for skateboarding, which lead him to impart his ingenious maneuvers and “tricks” to his children. They would spend countless weekends together at the skate park perfecting an ollie, drop-in, or kick-flip along with a multitude of other tricks. He was gregarious, boisterous, and the life of party. Troy was many things to many people, but what he treasured the most was being a father. He thoroughly enjoyed playing with his children, nieces, and nephews, which many times included rolling around on the floor, chasing them through the yard, playing dress-up, or even a tea party. Troy had a knack of bringing levity and humor to any situation. He will be remembered as a loving father, son, brother, grandson, uncle, nephew, cousin, and friend with an enormous heart. Troy leaves his loving memories to be cherished by his children Chance, Jaiden, Herlie, and their mother Ashley; parents, Mark & Julie Ellisor and Kimberly & David Autry; grandparents, Marion Richard & Kathy Montgomery and Richard & Mary Williamson; siblings, Brandon (Sarah) Ellisor, Kierstin Ellisor (Michael Worsham), Victoria (Casey) Craddick, Madison (Shane) Flesher, and Logan Autry; uncles and aunts, Kimberly (Curtis) DeVore, Katherine (Dean) Ahlschlager, Terry Ellisor, Kelley (Patrick) O’Malley, April Montgomery, Kindra (Ryan) Battenfield, Glen (Brandy) Montgomery, and Richard Williamson, Jr.; nephews and nieces, Kaeden, Olivia, Brooklynn, Kylie, Jordynn, Gracelynn, Westyn, Raelynn, Lincoln, Wrenley, with two on the way Phillip and Emelia. Also, an abundance of cousins, extended family, and friends. He is preceded in death by grandparents, Patsy Arlene Montgomery, Martha Jo Montgomery, and Agnes & Charles Ellisor. A Memorial Service will be held for Troy Ryan Ellisor on Tuesday, November 9, 2021 at 4:00 PM at Life Point Church, 38337 Spur 149, Magnolia, Texas 77354. The Addison family and staff of Magnolia Funeral Home extend condolences to Troy's family and friends during this difficult time.

The family of Troy Ellisor created this Life Tributes page to make it easy to share your memories.

Send flowers to the Ellisor family.