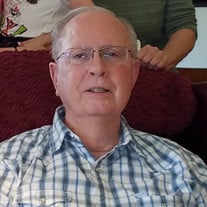 Thomas (Tom) Aubrey Foxworth, Jr was rescued from many years of pain by Jesus on November 4, 2020 at the age of 78 in Shenandoah, Texas. Born in San Antonio, Texas to Thomas and Marjorie Foxworth,Tom was the second of six children and the first boy. Tom was greeted in heaven by his mother, father and half brother Robert Powers, oldest sister, Barbara Briggs, and daughter Kris Tijerina. He is survived by his wife of 41 years, Judy, children Rhonda Foxworth, Jenny (John) Sanchez, Scott Foxworth, and Scott (Fabi) Rancour, along with grandchildren Kari Smith, Tori Tijerina, Matthew Tijerina Olivia Sanchez, Emily Sanchez, Erica Rancour, Marianna Rancour, Isaac Rancour, and great grandchildren Kenzlie and Kayd Smith. Starting a family at a young age may have derailed Tom’s plans for college but he went on to succeed in business through hard work and a keen mind. He worked in industrial manufacturing in engineering and sales, working his way into leadership positions. But what Tom really loved was physical work, using his hands and engineering mind to build and repair all manner of things. He especially enjoyed working with wood.His children and grandchildren all have at least one piece that “Paw-Paw” Tom built. Tom realized his dream of leaving the business world and long commutes in Houston traffic behind when he and Judy retired to the woods in East Texas. His workshop was a thing of beauty and bigger than many homes. Yet it was perfectly organized and appointed. Dementia and crippling back pain took away his ability to do the physical chores he loved, yet his playful sense of humor could still be found, even in his last days. While we must say goodbye to him on earth now, we know Tom is rejoicing in his new perfect body in Heaven and full of life and we will see him again one day. The family would ask that donations be made in Tom's memory, to the Alzheimer Association. The condolences of the Addison family and staff go out to his family and friends.

Thomas (Tom) Aubrey Foxworth, Jr was rescued from many years of pain by Jesus on November 4, 2020 at the age of 78 in Shenandoah, Texas. Born in San Antonio, Texas to Thomas and Marjorie Foxworth,Tom was the second of six children and the... View Obituary & Service Information

The family of Thomas Aubrey Foxworth created this Life Tributes page to make it easy to share your memories.

Thomas (Tom) Aubrey Foxworth, Jr was rescued from many years...

Send flowers to the Foxworth family.