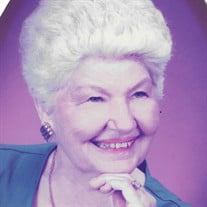 Thelma Gene (McCord) Burnett departed this world on the same date that she arrived, surely a sign that her time in this world was complete. Thelma was born in Randolph, Texas on a Sunday, the only child of James Orval McCord and Opal Lorene Biggerstaff McCord. Because her father passed away when she was eighteen months old, Thelma and her mother returned to the family farm where Thelma grew up alongside the three youngest of ten Biggerstaff children. She kept up with all her aunts, uncles, and cousins and became the unofficial family historian and touchstone. Thelma had two lifelong interests: antiquing and playing bridge. She enjoyed nothing better than the “hunt” for undiscovered treasures. After her husband retired, they traveled across the country to search for art glass and pottery. Thelma was a meticulous bookkeeper and enjoyed selling almost as much as finding. She also pursued bridge all her adult life, reading books, practicing strategy, and playing socially and competitively whenever she got the chance. She even attempted to teach her daughters and son-in-law the basics of the game, with mixed success. Thelma took great joy being a grandmother, tirelessly attending as many recitals, games, concerts, and graduations that she could. Thelma learned self-reliance from both her mother and grandmother, usually refraining from seeking help from her friends and church family. However, she herself quietly served others and regularly sent cards of encouragement and visited shut-ins. Thelma remained strong and independent until her last two months; she drove herself to church just two days before her first hospital visit, so she and her family had little warning that her body had reached its limits. Her family will miss her presence, love, and guidance terribly. But at the same time we rejoice that her struggle in this life is at an end. In addition to her parents, Thelma is predeceased by her husband Hal Alexander Burnett, Jr. She is survived by her daughter Gail Godlewski and her husband Robert; her daughter Nancy Yanochik and her husband Michael; granddaughter Allison Sellner and her husband Michael; granddaughter Caitlin Godlewski; grandsons Reagan Godlewski, Alexander Yanochik and Luke Yanochik, and great grandson Cayden Trevino. “He will wipe away every tear from their eyes, and death shall be no more, neither shall there be mourning, nor crying, nor pain anymore, for the former things have passed away.” -Revelation 21:4 The Addison family and staff of Magnolia Funeral Home extend condolences to Thelma's family during this difficult time.

Thelma Gene (McCord) Burnett departed this world on the same date that she arrived, surely a sign that her time in this world was complete. Thelma was born in Randolph, Texas on a Sunday, the only child of James Orval McCord and Opal Lorene... View Obituary & Service Information

The family of Thelma Burnett created this Life Tributes page to make it easy to share your memories.

Thelma Gene (McCord) Burnett departed this world on the same...

Send flowers to the Burnett family.