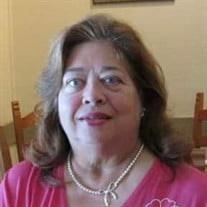 Sherry Ann (Ashby) Farrar, 75, of Houston, Texas, passed away Tuesday, March 22, 2022, at St Luke’s The Vintage Hospital in Houston. Born Sept 28, 1946, and raised in San Antonio, TX. She was the daughter of Donald and Agnes “Aggie” (Boezinger) Ashby. Sherry was a 1964 graduate of Highlands High School and a 1967 graduate of Southwest Texas State College (now Texas State University) with a Bachelors degree in Education and a Minor in Art. She worked as an Elementary Teacher & Middle School Math Teacher for 40 years. The first 36 were in San Antonio’s Independent School District, Bandera Independent School District & Spring Independent School District at Wunsche & Twin Creeks Middle Schools. Her last 4 yrs were spent Teaching Math at Lone Star College The Woodlands before officially retiring from education. Sherry loved her time with family in Rockport & Galveston playing games and making memories, she loved all flowers, watching the Astros, Texans, Rockets & attending ALL of her Grandkids sporting events. She also loved shopping and creating all kinds of gift bags for all occasions for her grandkids. She loved doing puzzles and playing nickels with the friends in her Independent Living Community. Sherry grew up in the Methodist Church and was a very strong Christian. She loved the Lord and was looking forward to spending eternity with Jesus. She touched many lives throughout her life and will be missed by so many. She is survived by, Daughter, Deborah & Husband Arron and granddaughters, Addison, Avery and Ashlee Phillips of Magnolia, Texas, and by Daughter, Donna Rocchi and grandsons Andrew “Drew” and Robert “Nolan” Rocchi of Huffman, Texas, Brother Donald “Donny” and (Monica) Ashby of Colorado along with many Nephews, Nieces, Cousins and Friends. She was preceded in death by her Father, Donald “Don” Ashby Sr and Mother Agnes “Aggie” Ashby. Her Celebration of Life Funeral Service will be held on Wednesday, March 30, 2022 at 2pm at Magnolia Funeral Home & Cemetery 811 Magnolia Boulevard Magnolia, Texas 77355. The condolences of the Addison family and staff go out to her family and freinds.

The family of Sherry Ann Farrar created this Life Tributes page to make it easy to share your memories.

Send flowers to the Farrar family.