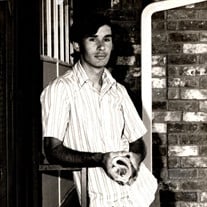 Ron Maynard, age 71 of Spring, passed away September 5, 2020, surrounded by his loving family. The Addison family and staff of Magnolia Funeral Home extend condolences to Ron's family during this difficult time. Ron would be so honored for you to donate to the Spring Baptist Church Missions Fund in lieu of flowers. (One of the things the family liked about his final resting place at Magnolia Memorial Gardens are the white-tail deer, who like to eat the flowers). Checks can be mailed to Spring Baptist Church Missions Fund in honor of Ron Maynard, at 633 E. Louetta Rd., Spring, Texas 77373. Ronald David Maynard (“Ronnie”) was born in Overton, Texas, to Joyce Estelle McGee Maynard and Horace Lenard Maynard. He is the big brother to Glen Maynard and Nancy Maynard Turnipseed. He was preceded in death by his father. He is survived by his wife, Jeanie, two sons, Clint and Ryan, daughter-in-law, Vanessa, and five grandchildren, Hunter, Kahryn, Isaiah, Davin and Sophia. Ron’s family moved to Kenedy, Texas, from Beaumont, when his dad was transferred by Gulf Oil Company. After graduating from Kenedy High School he attended and graduated from Beeville Junior College, then from Sam Houston State University in Huntsville with a BS in Social Services/Social Rehab. He and Jeanie married in May 1975 by Bro. Max Brown at First Baptist Church, Huntsville, Texas and moved to Pleasanton, Texas, where he worked for Bexar County MHMR as an alcoholism counselor. After their first son, Clint Daniel, was born they moved to Kenedy, Texas, where Ronnie worked as an adult Probation Officer. During that time he had the honor of being the youngest ordained deacon at First Baptist Church and served alongside his dad. Time off was spent with family and friends camping, tubing, boating, water skiing, horseback riding, flying, riding dirt bikes, and fishing. Eventually Ronnie went to work for Fox Photo and their family moved to Corpus Christi, Texas. There Ryan Nathan was born and within three years they moved to Houston, where he worked as an Adult Probation Officer until retirement. He was an active member of Spring Baptist Church and was honored to participate in choir. Music was his passion. He was deeply loved and will be greatly missed.

Ron Maynard, age 71 of Spring, passed away September 5, 2020, surrounded by his loving family. The Addison family and staff of Magnolia Funeral Home extend condolences to Ron's family during this difficult time. Ron would be so honored for... View Obituary & Service Information

The family of Ronald Maynard created this Life Tributes page to make it easy to share your memories.

Send flowers to the Maynard family.