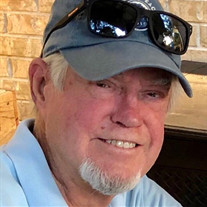 Robert “Bob” Blake Irvine On the afternoon of January 13, 2021, Bob passed away in the care and comfort of his wife Betty at their home in Conroe, Texas. He was born to parents Lola Key Irvine and Athill Wentworth Irvine in Hobbs, New Mexico on June 15, 1947. Bob graduated from Hobbs High School and then Eastern New Mexico University in 1970 with a double major in Computer Science and Business Administration. He began his career with Shell Oil Company immediately following his studies and relocated to Houston, Texas. Bob had a successful and long career with Shell Oil Company, retiring in 2005. Bob and his loving wife, Betty, thoroughly enjoyed their retirement life together. Bob was always Mr. Fix It. He loved to work in his shop and was game for any type of woodworking project. He was also on speed dial for family, friends and neighbors for anything from car issues to computer issues. He gave so much of his time and talents without a second thought as long as it didn’t interfere with any of his grandkids activities. He was their biggest fan and rarely missed a football game, baseball game, volleyball game, track meet, or soccer game. Bob was preceded in death by his son, Robert “Rob” Blake Irvine, Jr. He is survived by his wife, Betty, his daughter and son-in-law, Angie & Keith McPherson, his grandchildren Grant, Cate & Blair, his brother John T. Golden, and many nieces and nephews and great nieces and nephews. The family will gather for a small intimate celebration of a Bob’s life on Sunday January 17th at the home he and Betty designed and built. Due to the current Covid restrictions this is a private gathering. The family welcomes you to share your condolences and memories of Bob by signing the online guest book. In lieu of flowers please considering honoring Bob by supporting either the American Diabetes Association or the American Foundation for Suicide Prevention. The Addison family and staff of Magnolia Funeral Home extend condolences to his family and friends during this difficult time. A private, by-invitation-only, Celebration of Life will be planned in the near future.

Robert &#8220;Bob&#8221; Blake Irvine On the afternoon of January 13, 2021, Bob passed away in the care and comfort of his wife Betty at their home in Conroe, Texas. He was born to parents Lola Key Irvine and Athill Wentworth Irvine in Hobbs,... View Obituary & Service Information

The family of Robert Irvine created this Life Tributes page to make it easy to share your memories.

Send flowers to the Irvine family.