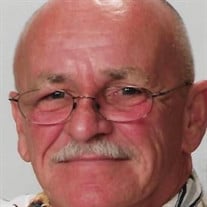 Richard Allen Saffell, 75 of Magnolia, Texas, passed away in Tomball, Texas on February 12, 2021. Richard was born in Indianapolis, Indiana on July 1, 1945 to Rose and Veryl Saffell. He attended school in Dallas, Texas. Richard worked hard in his life in different careers. He was a Honda mechanic for many years and later worked in a garage in Magnolia, where he got to know many of the locals. In his later years, he worked as a customer service associate at Lowe's. He was always working on different things like cars, boats and bicycles. If there was something that needed fixing, he wanted to fix it. He enjoyed many creative hobbies such as woodworking, carpentry, mechanics and archery. Richard also loved to attend church and read his Bible. He raised all 4 of his children in Magnolia, Texas and spent most of his time there. Richard is survived by his wife Shelia, Sister Alice Jane Saffell, Son Dustin Saffell and wife Shay, their children Megan and husband, Clint, Joshua, Easton, Dylan and Jordan; daughter Holly Fritsche and her husband, Timothy, their children Jacob and wife, Angel and their children Madison Mae, Caleb, Noah, Sera and Psalm; daughter Amanda Reid; His late son Damon's children Damon Jr., Alexandra, abbigail and Desiree; Stepdaughter Stephanie Hartsfield and her daughters Sasha and Skylar and their sons Kayston, Kylan and Oliver. He is preceded in death by his father Veryl Francis Saffell, mother Rose Fayalene (Bateman) Saffell and son Damon Allen Saffell. Forever loved and never forgotten The Addison family and staff of Magnolia Funeral Home extend condolences to Richard's family and friends during this difficult time. No services will be held through the funeral home.

The family of Richard Saffell created this Life Tributes page to make it easy to share your memories.

Richard Allen Saffell, 75 of Magnolia, Texas, passed away in...

Send flowers to the Saffell family.