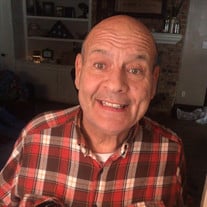 Michael James Maiers was born on October 22, 1958 in Dubuque, IA. He passed away on November 13, 2020 in Houston, TX at the age of 62 due to complications of lung cancer. He was surrounded by his loved ones and moved onto eternal life peacefully. He is survived by his mother, Donna Maiers of Surprise Arizona, his children; Matt Maiers, Rachel Richardson and husband Coby, Eddie Maiers all of Houston Texas, and his grandchildren; Britani and Kayla Richardson, Jonathan and Jaxson Maiers, as well as his brothers and sisters; Rob Maiers and wife Vicki, Beth Westby and husband Mike, Laurie Plate, Sue Tuff, Tom Maiers, and numerous nieces and nephews and extended family. He is preceded in death by his father Gene Maiers, grandparents; Edmund and Laverne Maiers and Frank and Hattie Mozena, brother-in-law Ronnie Plate, Eddie’s girlfriend Rachel Reed and longtime friend John Carey. Gene and Donna moved Mike and his siblings to Dawson, MN from Iowa to start farming in 1968. The family of 8 worked hard farming crops, raising cattle and hogs and operating The Maiers Hardware store located in town. Mike graduated from Dawson-Boyd High School in 1977 where he was the class President. Shortly thereafter he started his family and made his move to Texas. Mike made a name for himself in the “water” world and became known as the waterman. His lifelong career was in the water softener business but was also a master plumber. Some would same he mastered his craft. This career took him all over Texas; Dallas, Corpus Christi, Austin and eventually Houston where all of his children and grandchildren call home. Along this journey he never met a stranger and developed some lifelong friendships and confidants, even some marriages. Mike spent his free time coaching his son’s sports and teaching both of them the trade where they have continued the water business with his guidance. He always made one on one time for his daughter and helped tremendously rising his grandchildren. He never lost the love for the farm and just like his dad, Gene, loved all things John Deere. Mike was a grateful man, having such a wonderful family and receiving a heart transplant in 2016. He never spoke ill words and he will forever be cherished by so many. Considerations for his final Good-Bye can be made at https://www.givesendgo.com/MikeMaiers The condolences of the Addison family and staff go out to his family and friends.

Michael James Maiers was born on October 22, 1958 in Dubuque, IA. He passed away on November 13, 2020 in Houston, TX at the age of 62 due to complications of lung cancer. He was surrounded by his loved ones and moved onto eternal life peacefully.... View Obituary & Service Information

The family of Michael James Maiers created this Life Tributes page to make it easy to share your memories.

Send flowers to the Maiers family.