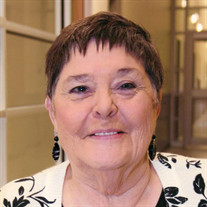 Mary Theis Williams, lovingly known as Mary Martha, of Tomball, Texas passed away on July 27, 2021 at the age of 81. In 1940, Mary Martha was born to A.W. “Allie” and Thelma Theis in Houston, Texas. She was a full of life from the start. She enjoyed time on the family farm riding horses, hunting and fishing. At a very young age, she married and had three children. She then met the love of her life, Tommy Williams Sr. and married on March 23, 1967. Together they had two children and spent 54 years making wonderful memories together. She spent her lifetime in Tomball raising her kids and worked forty-eight years for Tomball ISD touching many lives through her various jobs there especially as a bus driver and secretary to maintenance. She believed in you when you didn’t believe in yourself. Spending time with her was never a dull moment and she kept everyone laughing, She enjoyed dancing, music, collecting antiques, and hunting in her later years. Her true happiness came from spending time with her family and friends. She is survived by her husband Tommy Williams Sr. of Tomball, Texas; son Doug Herzog and daughter-in-law Rene of Branson, Missouri; son Dale Herzog and daughter-in-law Pam of Bremond, Texas; daughter Denise Eichinger and son-in-law Doug of Bremond, Texas; son Tommy Williams Jr of Tomball, Texas; and daughter Kristi Williams of Tomball, Texas; twelve grandchildren, seven great-grandchildren and one great-great grandson; sister-in-law Marie Theis of Tomball, Texas; sister Millie Martin and brother-in law David of Tomball, Texas; sister Patsy Coon of Tomball, Texas; numerous nieces and nephews; and a host of friends. She will be joined in a grand celebration by those preceding her in death: parents Allie and Thelma Theis; brothers A.W.”Butch” Theis, Jr, and Clifford Dale Theis; great grandson Bryan Keith Herzog Jr; brother-in-law Jimmy Coon Sr.; and nephew Jimmy “Bo” Coon Jr. The thoughts and prayers of the Addison family and staff go out to her family and friends.

The family of Mary Martha Williams created this Life Tributes page to make it easy to share your memories.

Send flowers to the Williams family.