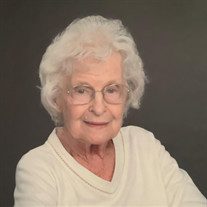 Margaret Pauline Andreatta, age 92, of Magnolia, Texas, passed away at her assisted living facility on Thursday, May 26, 2022, after an extended illness. Born on July 13, 1929, in Newport, Ohio, she was the daughter of Foster and Mary (Stossel) Kilpatrick. Margaret graduated from Uhrichsville High School in 1946. After her marriage, Margaret and her husband, Fred moved to Columbus, Ohio. She worked as a secretary for an insurance agency, while Fred completed his final year at Ohio State University. Margaret's career of choice was rearing her three children and providing a good home for them. She was an excellent cook and baker. After retiring to Florida, Margaret enjoyed biking, aerobics, and line dancing. She and Fred helped with the St. Vincent de Paul ministry at their church. They also helped with Habitat for Humanity. In 2000, Margaret and Fred moved to Magnolia, Texas, to be near their daughter and her family. She and Fred started each day by taking a long walk together before breakfast. They enjoyed traveling to several states to visit their sons and extended family. Margaret was a long time member of the congregation at St. Matthias the Apostle Catholic Church. She brought great joy and laughter to the staff and residents at Harvest Home Assisted Living, where she spent the last three years of her life. Margaret cherished her roles as wife, mother, grandmother, and great-grandmother. She will be missed by all of us who knew and loved her. Preceded in Death By: Husband - Fred Andreatta Grandson - Steven Michael Andreatta Parents - Foster and Mary (Stossel) Kilpatrick Siblings - Jack Kilpatrick, Martha Besozzi, Joann Porter Son-In-Law - Scott Smith Survived by: Children - Stephanie Villanueva and husband, Ignacio Mike Andreatta and wife, Sheila Jack Andreatta and wife, Patricia Grandchildren - Chris Smith and wife, Samantha Andrea Cantu and husband, Manuel April Lingle and husband, Scott Great-Grandchildren - Ashley and Christian Smith Ethan, Grayson, and Jacob Cantu Luke and Hudson Lingle Numerous friends also survive Margaret. The Addison family and staff of Magnolia Funeral Home extend condolences to the Andreatta family during this difficult time.

Margaret Pauline Andreatta, age 92, of Magnolia, Texas, passed away at her assisted living facility on Thursday, May 26, 2022, after an extended illness. Born on July 13, 1929, in Newport, Ohio, she was the daughter of Foster and Mary (Stossel)... View Obituary & Service Information

The family of Margaret Andreatta created this Life Tributes page to make it easy to share your memories.

Send flowers to the Andreatta family.