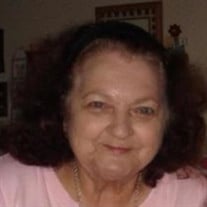 Lottie Jean Patterson went home to see our heavenly father on September 20, 2021. Jean was born on June 17, 1927 in Mt. Pleasant Township, PA to Hugh & Lottie Howard. Jean was the oldest of seven children raised in Harmarville. Her father Hugh was a coal miner and Jean was so proud to be a coal miner’s daughter and loved her parents very much. Jean was a true Rosie the Riveter during WWII, working in the factories during the war to running a pizza parlor. In 1962 she moved to Houston,Texas with her sister and soon found work as a carhop at Prince’s Drive-in, this is where she would meet the love of her life Pat Patterson. Jean was very cautious when it came to men so she made her sister and brother in law go with them on their first date, but it was not long after that she started working for Pat and soon they were engaged to be married. They were married on December 1, 1962 in Houston, TX. Together they owned Alcal Piano company in the Houston Heights for over 50 years.Together they would travel the country buying and moving pianos while visiting family and friends along the way. The most enjoyment was spending time with all their grandchildren and taking them on trips across the country. Jean was a talented singer, musician playing the piano and drums, a skilled bowler and she was always in the kitchen preparing a delicious meal for anyone that walked through her door. Later in life she stood beside her Pat as he returned to preaching and traveled all over spreading God’s word. Together they ran a homeless street ministry where she would prepare 100 sandwiches a week to feed to the homeless. It was around this time that Pat lost one of his legs to diabetes, but that didn’t stop them...even after losing the second leg it never kept them down. Jean would load up Pat in the truck and off they would go...to church, the lake house or to take one of their grandkids on an adventure. Jean cared for Pat up to the very end when we lost him in April 2012, a true love story coming to the end. Today we know that they have finally been reunited in Heaven and we are forever blessed and grateful to know they are finally together again forever. Jean was preceded in death in addition to her parents was her husband; Calvin “Pat” Patterson, grandchildren; Wanda Jean Steagall, Patty Ezell & Michael Culpepper. She is also preceded by siblings Melvin Howard, Almeda Pulliam, Sarah Ann Phillips & Frank Howard. She is survived by her daughters Janice Cormier; son Jimmy & Tonya Steagall; daughters Jamie & Bill Simpson, Danielle & Taylor Strange & Karen Denise & Mark Redmon. Sharon Pace; daughters Barbara Jenkins, Cammie Pace & Carrie Pace; son Johnathan & Shannon Culpepper and JJ Pace. Great-grandchildren Brandy, Jeri, Sarah, Adam, Madison, Luke, Abby, Vivian, Anna, Lily, Kimber, Jessica, Ryan, Samantha, Danielle, Brad, Casey, Macaleah, Alexander, Savannah, Madison, Hunter, Mason, Elizabeth, Deanna Jean, Jimmy, Landon, Zachariah, Jacob, Jayla & CJ. Due to a waiting list at Houston National Cemetery we are still not sure what day Jean will be buried.

The family of Lottie Jean Patterson created this Life Tributes page to make it easy to share your memories.

Send flowers to the Patterson family.