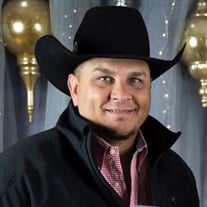 Kevin Blake McDuffie, of Hockley Texas, went to be with the Lord September 1st, 2021. He was taken from us too soon- at the young age of 40. Kevin was a loving husband, father, brother, uncle and friend to many. He was born in Madisonville, Texas. He lived and attended school in Iola for many years. He graduated from North Zulch High School. After graduation, Kevin started working for MidSouth as a Lineman and in later years went into the Dispatch Department. You could always catch him pulling pranks on someone. Working at MidSouth, Kevin had the opportunity to work with many people who became like family to him. A few years later, Kevin met Kristi and it was love at first sight. Kristi was the greatest blessing to Kevin and Luke. In their 13 years of marriage, they also added Paisley and Braxton to their family. We have all been truly blessed ever since. Kevin was a dedicated father who always supported his kids in every endeavor. His passion for rodeos came from a love of swinging a rope and riding horses. He loved being involved and sharing that passion with his family as well. He was most proud of watching his kids follow their dreams in the arena. If he had to miss their rodeos because of his work schedule- he expected a play by play from Kristi. His family was his number one priority and his kids were his pride and joy. Kevin was a true friend and the type of man you could count on for anything. He was known for his contagious laugh, biggest dimples and bear hugs. Kevin had and loved with the biggest heart. Most of all- he loved Jesus. He will be greatly missed by anyone who knew him. Kevin is survived by his Grandmother, Ima Myrle McDuffie, his loving wife, Kristi McDuffie, and children Luke, Paisley and Braxton McDuffie. Numerous other Family Members and Friends. He is preceded in death by his grandfather, Bill McDuffie. In Lieu of Flowers, donations can be made to the Scholarship Fund for TYRRA (Texas Youth Ranch Rodeo Association) in honor of Kevin. Checks can be mailed to TYRRA, P.O. Box 1257, Centerville, TX 75833 or left at the reception following the service. The Addison family and staff of Magnolia Funeral Home extend condolences to Kevin's family and friends during this difficult time.

Kevin Blake McDuffie, of Hockley Texas, went to be with the Lord September 1st, 2021. He was taken from us too soon- at the young age of 40. Kevin was a loving husband, father, brother, uncle and friend to many. He was born in Madisonville,... View Obituary & Service Information

The family of Kevin McDuffie created this Life Tributes page to make it easy to share your memories.

Kevin Blake McDuffie, of Hockley Texas, went to be with the Lord...

Send flowers to the McDuffie family.