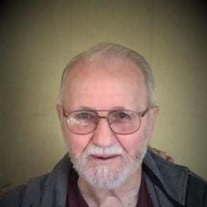 Kenneth "Ken" Allen Wilson of Cut-n-Shoot, Texas, born on September 23, 1939 to Carl and Lois Wilson in Walker County, Jasper, Alabama, went to be with his Lord and Savior on January 16, 2021 in Tomball, Texas at the age of 81. After graduating from Curry High School, class of 1957, Ken proudly served 4 years as a radio operator in the United States Marine Corps, Company C, 2nd Marine division, where he achieved the rank of Lance Corporal and earned two accommodations. Shortly after relocating to the Houston area, Ken attended Local Houston Plumbers Union #68 trade school, where he earned his master plumber license, which he held for over 50 years. In 1985, Ken incorporated Wilson Services Inc. where he was able to serve the greater Houston/Conroe community, retiring in 2013. A true follower of Christ, Ken was a faithful and long standing member of MIMS Baptist Church of Conroe, TX. He was devout, steadfast in his faith, and took every opportunity to share Christ with others. Ken is preceded in death by his parents Carl and Lois Wilson, brothers Carl Travis Wilson and Samuel Bruce Wilson, as well as his daughter Reba Sue Wilson. He is survived by his wife, Sylvia Liebsch Wilson, of 32 years who he married on September 3, 1988, his 3 sons Timothy Allen Wilson and wife Diane of Montgomery, TX, Daniel Ray Wilson of Lowell, AR, Nathan Wilson and his wife Brenda of O’ Fallon, MO., 4 Grandchildren, 3 Great-grandchildren and a host of nieces, nephews, cousins, and other relatives and friends. Visitation will be held at Magnolia Funeral Home, 811 South Magnolia Blvd, Magnolia, TX 77355 on Wednesday, January 20, 2021 from 1:30pm-3:00pm. A graveside Memorial Service and Burial will follow at Boldo Cemetery in Walker County, Alabama at a later date. The Addison family and staff of Magnolia Funeral Home extend condolences to his family and friends during this difficult time.

Kenneth "Ken" Allen Wilson of Cut-n-Shoot, Texas, born on September 23, 1939 to Carl and Lois Wilson in Walker County, Jasper, Alabama, went to be with his Lord and Savior on January 16, 2021 in Tomball, Texas at the age of 81. After graduating... View Obituary & Service Information

The family of Kenneth Wilson created this Life Tributes page to make it easy to share your memories.

Send flowers to the Wilson family.