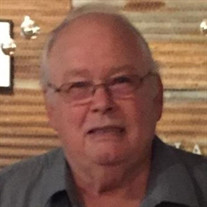 Joe Arthur Williams, aka “Dad”, “Daddy Joe”, “Grandpa”, and “Pawpaw” gained his angel wings on October 5, 2021 at the age of 78. He was born on January 27, 1943 in Charlotte, North Carolina to B. C. Williams and Tiny Bell Terry. Joe spent many years in the New Orleans area, until he moved to Houston in 1962 where he had a fateful blind date with Carolyn Fleming. Carolyn’s friend, Bobbie Coleman, arranged the double date and the rest is a beautiful love story. Joe asked Carolyn to marry him 6 months after their blind date and she happily accepted. They married on June 28, 1963 and Joe became an instant and wonderful step father to Carolyn’s children … Annette, Cary and Gary. Joe and Carolyn had a son of their own, Joseph Alan, born on November 20, 1967. This was a very exciting date as Joseph was the 200 millionth American baby born. Joe, Carolyn, and Joseph were all featured in Life Magazine as well as local news. Joe worked in Houston for the Highway Department before joining Randall’s as a Meat Cutter and later a Meat Market Manager. Following a dream to have his own BBQ business, he and Carolyn moved to California to join Ken and Dianne Fleming to introduce Texas BBQ to California. When he returned to Houston, he worked for HEB as a Meat Market Manager until he retired. Joe loved spending time with his family, bass fishing, cooking BBQ, playing slots, gardening, and golfing. His annual fishing trips to Toledo Bend were very special as he spent time with his lifelong fishing buddies. Every holiday, he looked forward to spending time with his family, cooking, playing yard games, dice games, and holding his adored grandchildren and great grandchildren. Joe is preceded in death by his parents and his brother, Jimmie Williams. He is survived by his wife, Carolyn; stepdaughter Annette Andrews and her husband Tom, stepson Gary Harmon and his wife Vikki, stepson Cary, and son Joseph; Grandchildren Ashli Shreve and her husband Sam, Jared Harmon, Kyle Harmon, Jennifer Clapp and her husband Joel, Josh Williams and his wife Marica, Jessica Feland and her husband Zach, Chelsey Harmon, Cole Andrews, Jacy Williams, Blake Andrews, Joe Williams, Jayla Williams, and Blake Harmon; Great-grandchildren Easton Shreve, Hayven Clapp, Hadleigh Clapp, Hazeleigh Mantai Feland, Ellie Shreve, Xander Clapp, Ella Feland, and Hudson Williams; and many beloved in-laws, nieces, nephews, and friends. In celebration of Joe, please wear your favorite fishing shirt! Immediately following the Internment please join the family for a luncheon at Unity Park Williams Pavilion, 19450 Unity Park Drive, Magnolia TX 77355 The Addison family and staff of Magnolia Funeral Home extend condolences to Joe's family and friends during this difficult time.

The family of Joe Williams created this Life Tributes page to make it easy to share your memories.

Send flowers to the Williams family.