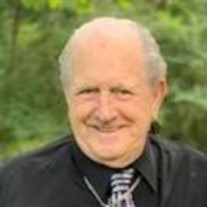 Herman Lowell Day 79 of Magnolia, Texas, entered into this his eternal rest with his Lord October 26th, 2021. He had been failing in health for the past 4 years. Herman was born June 1, 1942 in Dayton, Ohio to Marion Theodore (Ted) and Georgia P. Knight (Day) He married the one he had to have and loved; Jerita Geesling Day on Christmas Eve, 1962 and would have celebrated 59 years of marriage this year. Herman worked in high rise construction and later drove a truck, rounding out his working years. He answered to the call of the Lord to preach the Gospel and was later ordained a Minister in May of 1971 and went on to Pastor the Haven of Rest Church in Jamestown, Ohio for several years. He loved the Word of God and would Minister to anyone at any time. Herman is survived by wife, daughters, Holly Stewart (Dan) and Cheryl Grau (Wayne) Also, Grandchildren that he dearly loved: Jacob (Ava), Brandon, Zachary (Alexis), Stewart Caleb and Jared Keleshain, Hanna and Kristopher Grau. Great Grandchildren: Ethan & Caden Stewart, Rylee Stewart, Clyde Benjamin and Tamzen Neal & Elijah Grau, all of Texas. Sister, Ozella Coldiron and Bro Norman Day of Washington Court House, Ohio. Many nieces and nephews and a host of friends. Preceded in death by his beloved daughter Alisha Keleshain, his parents and sister Rose Robinson. He was a husband, father, brother, uncle, “Papaw”, Minister and friend that will be missed terribly. Herman was one of a kind. He loved riding his many motorcycles he owned over the years. He just couldn’t pass a good yard sale, flea market, or auction. He even became an auctioneer in 1995, and if he thought he found a bargain, it was SOLD. Funeral arrangements in Texas, were entrusted to Magnolia Funeral Home, Magnolia TX Funeral arrangements have been entrusted to Summers Funeral Home, Washington Court House, Ohio. Visitation will be 4-7 Sunday, October 31st and Funeral Monday, November 1st at 1pm. Burial will follow in Washington Cemetery. The Addison family and staff of Magnolia Funeral Home extend condolences to Herman's family and friends during this difficult time.

Herman Lowell Day 79 of Magnolia, Texas, entered into this his eternal rest with his Lord October 26th, 2021. He had been failing in health for the past 4 years. Herman was born June 1, 1942 in Dayton, Ohio to Marion Theodore (Ted) and Georgia... View Obituary & Service Information

The family of Herman Day created this Life Tributes page to make it easy to share your memories.

Herman Lowell Day 79 of Magnolia, Texas, entered into this his...

Send flowers to the Day family.