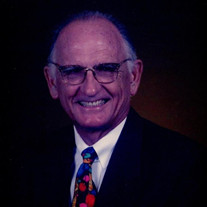 Harlen Center entered the presence of God on Tuesday, December 7, surrounded by his loving wife Barbara, daughters, Jeannie and Cynthia, and his only brother, Jerry Center. He was preceded in death by his parents, Arlen Harlen Center and Bonnie Kirk Center. He is survived by his wife of 23 years, Barbara Worsham Center, daughters Jeannie Lynn Center, Elgin, Texas, and Cynthia Pilkington (John) of Houston, son Dr. Wesley David Center (Lydia) of Burleson, Texas, and daughters Dacia Kauffman (David) of Magnolia and Pam Myers (Mike) of Salisbury, North Carolina. Harlen had nine grandchildren: Kaitlyn Center Ellisor (Kyle), Zachary Haynes (Rachel), Cameron Jackson Center (Sarah), Kelly Lynn Center, Madison Crowell, Michael Hubbard, Dustin Hubbard (Brittney), Morgan and Bayli Adelman, and seven great-grandchildren, Caroline Marie Ellisor, Hadley Kate Ellisor, Kaiden, Dawson, Leslie, Kennedi, and Maddox Hubbard. Harlen is also survived by his sister, Anita Center Pollitt of Sacramento, California and brother, Jerry Center (Amy) of Reno, Nevada, as well as numerous nieces and nephews. Born on July 19, 1934, in Cauthron, Arkansas, Harlen accepted Christ as his Savior at an early age. His family later moved to Berkeley, California where he graduated from Berkeley High School and then went to Howard Payne College in Brownwood, Texas to pursue studies in voice and music education. While there he served his first church, Avenue D Baptist Church, as Minister of Music beginning in 1954. He returned to California to pursue a master’s degree in Music at what was then known as Golden Gate Seminary in Berkeley and continued his studies at Southwest Theological Seminary in Ft. Worth, Texas. Harlen served as Minister of Music for over 50 years, serving churches in Texas, California, Salem, Illinois, and Florissant, Missouri before returning to Houston, Texas to serve Melrose Baptist Church in 1968. While at Lindale Baptist Church in Houston, he met and married Barbara. Harlen was a gifted music director and soloist, and he regularly and joyfully sang with The Singing Men of Southeast Texas. Over his years of ministry, he invested in the lives of many young people, including several choral groups. Harlen served on the City of Magnolia Planning Commission. He retired from Prudential Insurance in 1995 to pursue hobbies of travel, gardening, and making stained glass pieces for family and friends. He enjoyed singing with the Statemen Barber Shop Chorus. He and Barbara were members of Magnolia’s First Baptist Church where he sang in the choir, served in the church’s 5 PM worship service, led the hand bell choir and was a member of the Jonathan Sunday School Class. Pallbearers are Zachary Haynes, Cameron Center, Kyle Ellisor, Dustin Hubbard, Michael Hubbard, and John Pilkington. Honorary pallbearers are David Kauffman and Mike Myers. For those wishing to do so, the family would appreciate gifts made in Harlen’s memory to the Parkinson’s Foundation, 200 Southeast 1st St., Suite 800, Miami, FL, 33131. The condolences of the Addison family and staff go out to his family and friends.

Harlen Center entered the presence of God on Tuesday, December 7, surrounded by his loving wife Barbara, daughters, Jeannie and Cynthia, and his only brother, Jerry Center. He was preceded in death by his parents, Arlen Harlen Center and Bonnie... View Obituary & Service Information

The family of Harlen Wayne Center created this Life Tributes page to make it easy to share your memories.

Harlen Center entered the presence of God on Tuesday, December...

Send flowers to the Center family.