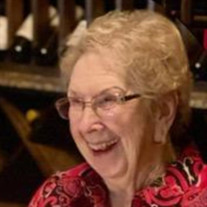 Doris Scutt went peacefully to meet her Heavenly Father on February 8, 2022. Doris was born on February 10, 1934 in Houston to her parents Alice and Rufus Wilmoth. Doris grew up in South Houston on Wayside Drive along with her younger sisters Sylvia Wilmoth Kuenemann and Elsie Wilmoth. Doris took some college courses following high school and eventually went to work at Shell Oil Company where she met Tom Williamson. Tom and Doris were married August 14, 1959 in Houston. Just over a year later they began their family with the birth of daughter Cheryl and hence Doris’s new career as a Homemaker. Shell transferred Tom to New York for a few years and they continued growing their family with the birth of Cindy and David in Tarrytown, NY. In 1968 Shell transferred the family back to Houston where Doris continued raising the kids and began typing for a court reporter from home. Years later in 1979 Doris helped Tom start RCW Nurseries in Northwest Houston and just three years later they started their second business Williamson Tree Farm in Plantersville, Texas. Doris and Tom separated in the early 1980’s yet continued to run both businesses together as dear friends and business partners until 1998. In 1999, Doris married widower Wayne Scutt, a life-long friend from church. Doris and Wayne moved to Canton, Texas and lived there until Wayne’s sudden passing in 1999. Doris moved back to Houston and resumed her career with the businesses until 2018. She continued to work part-time until her stroke in September 2021. Doris lived a life of deep spirituality and divine love for everyone she met. She was a devoted member of the Ninth Church of Christ, Christian Science, and taught Pre-School Sunday School there for years. She was disciplined in her daily walk with scripture readings and listening to Bible lessons, and shared her knowledge and love in living an exemplary Christian life. With her quiet humility she impacted any room she was in with her sweet spirit, smile, and sparkle in her eyes. Doris was beloved and will be missed. Doris is survived by her children Cheryl Denson, Cindy Pounds and husband David, and David Williamson and wife Cathleen, her sister Sylvia Kuenemann and husband Ben of Austin, her sister Elsie Wilmoth of Houston, her grandchildren Trevor Pounds and wife Jordan of Dallas, Cody Pounds and wife Jackie of Tomball, Bradley Pounds of Dallas, and Preston Pounds of West Point NY, several great-grandchildren, and numerous other special relatives and friends. The Addison family and staff of Magnolia Funeral Home extend condolences to the Scutt family during this difficult time.

Doris Scutt went peacefully to meet her Heavenly Father on February 8, 2022. Doris was born on February 10, 1934 in Houston to her parents Alice and Rufus Wilmoth. Doris grew up in South Houston on Wayside Drive along with her younger sisters... View Obituary & Service Information

The family of Doris Williamson Scutt created this Life Tributes page to make it easy to share your memories.

Send flowers to the Scutt family.