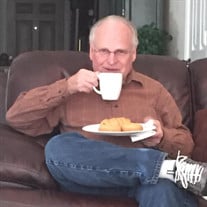 Don was born September 9, 1942 as a twin with his brother Mike. However, by the time of his death they had grown apart and only spoke to each other about ten times a day. By looking at his pictures on his phone anyone could see the things in life he loved most were his wife Margie, grandchildren, flowers, and cars. He also loved watching Fox News and especially meeting and talking with all kinds of people. Don worked as meat department manager in a grocery store his whole career. His first job was at Sid’s Supermarket in Northshore. He loved his job, enjoyed helping customers and became friends with so many people. He naturally loved to eat meat, especially a good steak. He was the first market manager at Food Town where he retired. He developed very close relationships with so many Food Town employees. One friend stood out among the others - Sam Flores. Over 34 years Sam and Don became brothers. When Sam visited my dad this week in ICU, the nurse asked “are you family?”. His brother Mike was also in the room. Sam answered without hesitation “yes, we are triplets”. The nurse looked over at Mike and looked perplexed. Don and Margie married on May 6, 1961 after dating for 6 months. They were married for almost 60 years. They raised three sons and adored their grandchildren. Don was a Christian and loved the Lord. He and his family attended Royalwood Baptist Church where they served for many years. Later in life they attended Faith Bible Church. Those who met Don realized very quickly that he loved people and showed Christ’s love to them. Don was a compassionate man that was a great listener, had an abundance of empathy and was aware of people’s needs and worked to meet those needs. He also knew this world was not his forever home. Quoted from Billy Graham, “The most thrilling thing about heaven is that Jesus Christ will be there. I will see Him face to face. Jesus Christ will meet us at the end of life’s journey.” “Heaven doesn’t make this life less important; it makes it more important.” “The Bible says that as long as we are here on Earth, we are strangers in a foreign land. There are enemies to be conquered before we return home. This world is not our home; our citizenship is in heaven.” The last several years have been difficult as Margie’s dementia robbed them of some of their morning coffee discussions and work in the garden but Don used this opportunity to make new friends at Rosemount Memory care unit which he visited almost every day even while keeping up with all of his chemo appointments. Don was especially proud of his new great-granddaughter Elliot, bragging on her even his last days in the hospital. He also spent his final days sharing details like how Margie loved yellow roses and he liked to mix Blue Bell chocolate and cookies and cream ice cream. Even throughout it all he loved hearing people talk around him and paid close attention to all the conversations, when he was listening to country gospel music sung by his favorite singer, Dolly Parton. On April 13, 2021, with his loved ones around him for days, Don succumbed to his cancer and after deciding to stop treatment, went to be with the Lord, where he is now sitting in a recliner, talking with his parents and brother Jerry, drinking a cup of coffee, and waiting for Margie, the love of his life. The Addison family and staff of Magnolia Funeral Home extend condolences to Mr. Watson's family and friends during this difficult time.

Don was born September 9, 1942 as a twin with his brother Mike. However, by the time of his death they had grown apart and only spoke to each other about ten times a day. By looking at his pictures on his phone anyone could see the things in... View Obituary & Service Information

The family of Donald Watson created this Life Tributes page to make it easy to share your memories.

Send flowers to the Watson family.