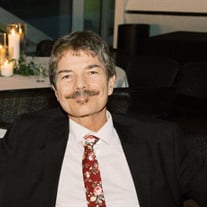 Don Love, 71, passed away peacefully at home on September 29, 2021. His wife, all of his children and their spouses and children were tenderly caring for him up until his passing.. He was constantly surrounded by their faithful presence and love. Don grew up in Toronto, Ontario, Canada. He naturalized as a citizen of the United States in March 1989. However, his upbringing in a big city like Toronto made him feel at home in other large cities that he and his wife travelled to. He was able to easily use subways, busses, and more, on travels with his small town wife. It seemed like he had a superpower to her because of the ease with which he got his bearings and navigated new places. After High School, Don went to college to prepare for Christian ministry. He graduated from the Apostolic Missionary Institute in Picton, Ontario, Canada. Upon graduation, he struck out to evangelize and quickly was booked by pastors across the United States to hold revivals in their churches. It was at one of these revivals in California that he met his wife, Candace, as her father had invited him to hold a revival at the church he pastored. They were married February 1, 1974 and she joined him in his evangelistic travel and ministry. Don was in full time ministry for over 35 years. First, a young evangelist, then as an assistant pastor to Pastor David Gray in San Diego, California for over 2 years. During that time he was also the youth secretary for the entire Western District of our church organization which included several states, youth president of our local district, and principal of the Christian School associated with the church. In January 1976, Don, Candace and their infant son Dustin, became pastors of a small church in Monterey, California. They lived in the Sunday School rooms that had been turned into living quarters above the church. Because the church had only 17 people, Don worked as a school teacher to pay the bills. He also went door to door to offer people Bible studies in their homes and to invite them to our church. The church began to grow and it was so fulfilling to him to minister to people and see lives growing spiritually. Early on in his pastorate we became a non-denominational church and God blessed us to minister with a new freedom and purpose untainted by legalism, reaching many people with the love and light of God’s unconditional, non-judgmental love. During that time, we were inspired by pastors like Jack Hayford to grow in our understanding and way of pastoring. His father-in-law, Robert Lineberry, was also a major influence in his ministry. Don truly loved people. His gifts were faith, humility, patience, counselling, listening and non-judgmentalism. He was a Shepherd pastor and his presence alone built and encouraged those blessed enough to know him. Don’s sermons were practical and powerful. He could also be very funny and he delivered truths that changed lives in a natural and engaging way. He was definitely not boring, and even children would pay attention. He did not minister from pride or to be thought smart by other theologians. He ministered to lift, refresh and point people to God. After moving to The Woodlands, Texas in 2007, Don was able to become successful in an entirely new area. The same gifts that were evident in his pastoring were again the strengths that built strong relationships with business partners and clients. Don had many interests and enthusiasms in his life. He was a competitive racquetball player, winning tournaments and trophies. He also loved baseball and football, and as his sons grew up they became his cohorts. He loved his Starbucks coffee and had his own special “recipe” that he ordered regularly, as well as chocolate and caramel candy. He enjoyed travelling with his wife and his kids. He loved cruising and also could get around European cities in a car. But most of all, he loved people and was enthusiastic about their life, their future, and their ability to overcome and rise again. His belief in others was contagious. Don is predeceased by his father, Stuart Love. His father was an assistant pastor and his life, as well as his mother’s, greatly influenced Don’s decision to pursue ministry as a vocation. He is survived by his mother, Dorine Love, 90 years old. He is also survived by his wife, Candace and his six children, Dustin, Chelsea, Jordan, Landon, Brendan and Christian, and his daughters-in-law, Heather (Jordan’s wife) and Karla (Brendan’s wife). His grandchildren were blessed to have a grandfather that loved them so selflessly. They are Cicely (18), Ella (9), Asher (4), Grayson (3) and Judah (2). We invite all of Don’s loved ones, family and friends, as well as those who love and know his surviving family to join us in remembering his beautiful life. We will honor Don and celebrate his life at a memorial service on Tuesday, October 26, 2021 at 1:00pm. Chapel in The Woods - Woodlands Church. 1 Fellowship Dr, The Woodlands, TX 77384 Please enter the long driveway and follow the signs to the Chapel. It is a bit away from the large auditorium and other buildings of the Campus. The service will be live streamed.

Don Love, 71, passed away peacefully at home on September 29, 2021. His wife, all of his children and their spouses and children were tenderly caring for him up until his passing.. He was constantly surrounded by their faithful presence and... View Obituary & Service Information

The family of Donald Love created this Life Tributes page to make it easy to share your memories.

Send flowers to the Love family.