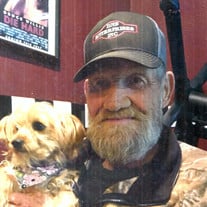 Danny Darrly Washington, 73, of Magnolia, Texas passed away on January 23rd, 2022. Danny was born on March 21, 1948, in Charleston, West Virginia to William Everette and Frieda Marie Washington. He comes from a large family of 14 siblings, 7 brothers and 7 sisters. Danny was a hardworking carpenter, who worked in construction most of his life. He worked on things from houses to high rise buildings in downtown Houston. He even built and worked on his local hangouts, Magnolia Diner and Shipley’s, where you could find him daily, eating and visiting with friends .He enjoyed fishing, hunting, riding 4 wheelers with his grandchildren and watching sports. Danny was a jokester. He loved to tell jokes and make people laugh. Danny is survived by his wife of 54 years, Virginia Beth Washington. Son, Billy Wayne Washington, and spouse Shawn Liv. Daughter, Dana Lynn Laviolette and spouse John Wayne Laviolette. Grandchildren, Kayla Renee Washington, Bradley Dean Washington, Daniel Steven Smith, Dillon Tyler Smith, and Madison Nicole Smith. Great- Grandchildren Amaleigh Dean Washington and Holden Dean Washington. Danny is preceded in death by his parents, William, and Frieda Washington and 11 of his siblings. He was beloved by many, and the family would like to hear stories, memories and jokes that make you think of or remember Danny. You can do that by either sharing your stories at the funeral or writing them down for the family to read at a later time. The family will have a box provided at the funeral if you choose to leave a note. The Addison family and staff of Magnolia Funeral Home extend condolences to the Washington family and friends during this difficult time.

Danny Darrly Washington, 73, of Magnolia, Texas passed away on January 23rd, 2022. Danny was born on March 21, 1948, in Charleston, West Virginia to William Everette and Frieda Marie Washington. He comes from a large family of 14 siblings, 7... View Obituary & Service Information

The family of Danny Washington created this Life Tributes page to make it easy to share your memories.

Danny Darrly Washington, 73, of Magnolia, Texas passed away on...

Send flowers to the Washington family.