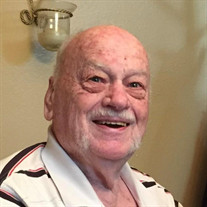 Bill Hamby was born March 30, 1930 in Lagrange Georgia and passed away January 8, 2022 in Tomball Texas. He was preceded in death by his father John L. Hamby, mother Minnie (Veal) Hamby, sister Betty Joyce Collins and her husband Jackie Collins, and grandson Eric B. Kearney. Bill is survived by his son Mike Hamby and wife Peggy, daughter Doris Vanderboegh and husband Richard, daughter Kimberly Kearney and husband Keith, eleven grandkids and their various spouses and significant others, seven great grandkids, and one great, great grandchild. Bill was raised in Alabama in a home with no running water and no electricity and learned a lot in those early years. He joined the military (USAF) in April 1949 serving honorably over 26 years including during the Korean War, the Vietnam War, and the Cold War. He retired July 1975 from active service and opened his own business (“Hamby’s Darts and Stuff”). He managed that business until retiring in December 2019 after 44 years of self-employment at the age of 89 almost 90! Bill was stubbornly independent living on his own in San Antonio until just prior to his 91st birthday. Bill was an avid bowler and dart enthusiast in his younger days. He once bowled a perfect 300 game during a tournament in Dallas Texas. Like all of us, Bill had his challenges in life and struggled with many things, but ultimately he loved his kids, grandkids, great grandkids and his great, great grandchild. Bill achieved a lot during his time in the military and thereafter. He was an honest man, a good person, loved by family, respected by friends, and he will be missed. Bill Hamby will be interred at Fort Sam Houston National Cemetery on January 28th, 2022 at 10:15am. There will be a small graveside service to include military honors. The Addison family and staff of Magnolia Funeral Home extend condolences to Billie's family during this difficult time.

The family of Billie Hamby created this Life Tributes page to make it easy to share your memories.

Send flowers to the Hamby family.